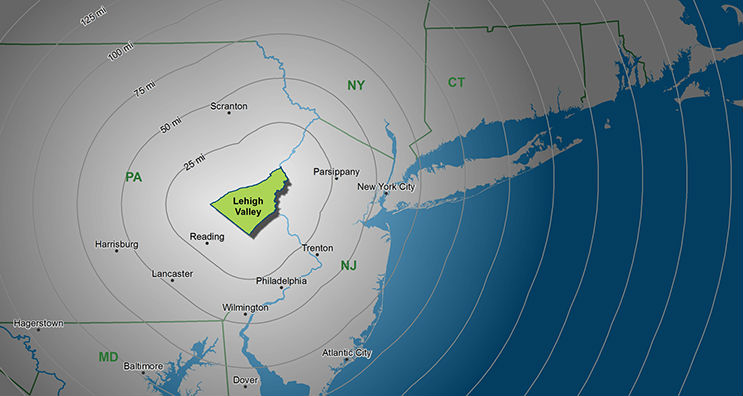 The Lehigh Valley is a 726 square mile region in eastern Pennsylvania. The Valley is located about 80 miles west of New York City and 50 miles north of Philadelphia. These cities and their surrounding market areas exert strong economic, demographic, and social impacts on the region.

In the 1730s settlers began the agricultural development of the Lehigh Valley. During the 19th and 20th centuries canals, railroads, and highways coupled with the manufacturing of steel, cement, heavy trucks and chemicals continued to transform the economy and the landscape. Today the region is home to more than 665,000 people. Growth, development and immigration continue patterns of change that began 300 years ago.

There are 2 counties, Lehigh and Northampton, and 62 municipalities in the Lehigh Valley which include 3 cities, Allentown, Bethlehem, and Easton, 27 boroughs and 32 townships. In addition there are 17 school districts.