Pennsylvania contains about 25,000 state-owned bridges, the third largest in the nation, and leads the nation in the number of bridges classified as structurally deficient. Each of those bridges is inspected on at least a two-year cycle, more often if a bridge is identified with serious deterioration. The safety of those bridges and the traveling public is paramount. If a bridge is found to be unsafe, it is closed. Bridges deemed able to carry only certain weights are posted with weight limits. The Lehigh Valley contains a total of 912 bridges, 656 (72%) are state-owned, while 256 (28%) are locally-owned. Bridges can be classified as functionally obsolete—a bridge that does not meet current design standards (i.e. substandard lane or shoulder width, vertical clearance, etc.), or structurally deficient—a bridge in which one or more of its critical components requires significant

maintenance and repair to remain in service and eventual rehabilitation or replacement to address deficiencies. The following table depicts bridge conditions in the Lehigh Valley. 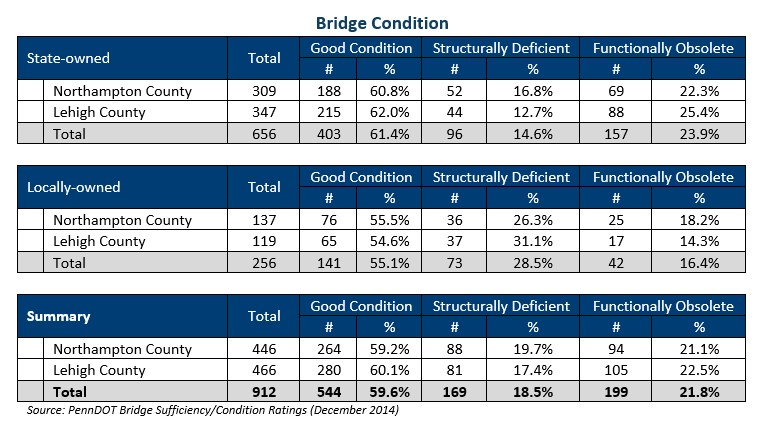 An initiative is underway to reduce the number of structurally deficient bridges in Pennsylvania. Referred to as the Rapid Bridge Replacement (RBR) Program, it is PennDOT’s ongoing effort to address the state’s 4,200 structurally deficient bridges more quickly. This program focuses on bridges of similar size and design. Most bridges on the RBR program are primarily crossings on smaller state highways, mainly in rural areas rather than interstate bridges or large river crossings. Addressing similarly designed bridges allows for increased efficiencies by allowing for the replacement of these structures more quickly.