A previous article detailed the trip that several LVPC employees made on Friday, May 20, biking from various points in the region to the LVPC offices on National Bike to Work Day. But the annual celebration of non-motorized commuting is officially called “National Bike/Walk to Work Day”, and this year it included another LVPC staffer who commuted to work. That’s right: Eric McAfee, AICP, Director of Community Planning, lives close enough to the offices that it is perfectly reasonable to walk. If all goes well, it takes him about 15 minutes.

In the previous article on Bike to Work Day, the bicyclists noted that, despite ample rights-of-way, the trek from their homes to the office in Hanover Township (Lehigh County) was often uncomfortable, due to a general lack of infrastructure specifically devoted to bicycles and the occasional motorist who did not show much regard for the two-wheeled vehicles sharing the road. From the perspective of walking along Marcon Boulevard and Irving Street, the conditions for pedestrians aren’t great either. Fortunately, Marcon Boulevard has a saving grace: a painted white stripe near the curb on the northern side of the street, which is clearly visible in the photo below:. 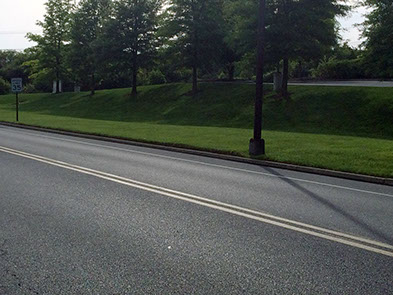 This stripe clearly demarcates an edge of the cartway, which it appears that most motorists seem to recognize. Anyone driving along Marcon around the lunch hour is likely to see workers at the various offices along Marcon getting some mid-day exercise by walking in the approximately five feet that this space provides. That said, it only exists on the north side of the road. Additionally, safety standards typically encourage pedestrians using streets without sidewalks to walk against the flow of traffic, which means that any pedestrian headed westward on Marcon should remain on the southern side of the street, which lacks any white stripe.  Here’s how it looks: 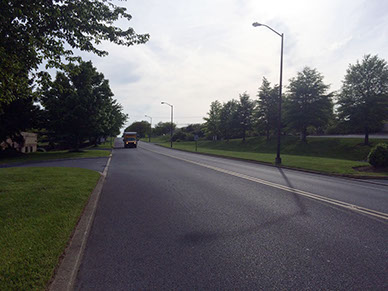 Not exactly pedestrian-friendly. It’s far safer just to walk in the grass. Or to take the other side of the street with the white stripe. But the demarcated shoulder of the road still fails to guard against conditions like this one:

Notice the bend in the road. A person walking between the white stripe and the curb may feel somewhat protected, but a driver traveling quickly around that bend could easily stray into the shoulder without noticing a pedestrian while making such a sharp turn. In fact, Eric has noticed while walking to work that some vehicles unwittingly fishtail across the stripe into the shoulder while navigating the curve.

Clearly a stripe in the road is still nowhere near as safe as a grade-separated sidewalk.  Fortunately, the recently released WALKLV: Regional Sidewalk Inventory has noted some portions of the Lehigh Valley with a remarkably strong and contiguous sidewalk network, which in some cases also links to the region’s robust network of recreational trails. Priorities in improving the pedestrian environment would be to fill some of the missing gaps in sidewalks, particularly noticeable in the areas with medium population density, or to focus pedestrian accessibility on existing LANta transit routes—like Marcon Boulevard. Such improvements in infrastructure and safety standards (often one in the same) could make walking to work an achievable reality for a considerably greater portion of the Lehigh Valley’s commuting population.