The U.S. Census Bureau says the Lehigh Valley has 270,143 housing units, and if you’re in the market, you can find one at just about any type, size, condition or cost.

Growth and diversification in residential development is having a significant impact on the housing market of the Lehigh Valley. Housing sales volumes and median sales prices are up and the diversity of housing types built in recent years has reduced the dominance of single-family detached. At the same time, new apartments in urban centers and developed suburbs have drastically increased available rental housing – leading to growth in the percentage of renters in the region.

The diversification of the housing stock allows the market to better meet the needs of the region’s residents. However, much of the construction in recent years has been on the higher-end of the market for both single-family housing and apartments, and many middle-cost housing units have seen their prices increase. Combined with lower than average housing development in the last decade and consistent regional population growth, prices are expected to continue to rise. Despite this pressure on prices, median sales price and rental prices remain attainable by middle-income households in the region.

This tool is intended to identify areas of the Lehigh Valley that are at increased risk for foreclosure and eviction, due to the COVID-19 Pandemic’s impact on the economy and jobs market. By identifying where families are paying too much for housing, and which people are most at risk of losing their jobs, it can help isolate where the most intense housing problems are likely to exist.

The tool includes a breakdown of the age of people paying too much, or at-risk of losing their job, because isolating the age group can play a critical role in assessing specific populations that are at risk of losing their homes.  For example, the analysis reveals that Lehigh Valley senior renters, age 65 and older, are the age group struggling the most to pay for housing. Age of householder data is sorted into three additional ranges – 15-24, 25-34 and 35-64.

Overall, the LVPC analysis shows that 52% of roughly 77,000 renting households and nearly 24% of over 170,000 owner households are paying more for housing costs than is recommended by national housing attainability advocates and experts—a condition known as cost-burdened—and are most at risk of losing their homes. A household that is cost-burdened is paying more than 30% of gross income on housing costs, and is more likely to struggle to pay for other basic needs such as utilities, healthcare, childcare, transportation and food. They are also likely to have less disposable income, which impacts the economic vitality of their community and the larger region. The analysis shows that these households at risk of being unable to afford rent or mortgage payments are located throughout the region, in rural, urban and suburban municipalities. In fact, some communities have neighborhoods in which more than 80% of households are cost-burdened.

It should be noted that cost-burdening is not always a forced situation, as some households elect to devote more income to housing costs than is recommended by housing experts as a lifestyle choice, to live closer to a job or to live in a specific school district, for example. However, the unexpected and rapidly evolving employment conditions caused by the COVID-19 Pandemic are likely to increase the risk of foreclosure and evictions for households that were previously financially stable, as well as those lower-income households that have limited financial flexibility.

In partnership with the Federal Reserve Bank of Philadelphia, further analysis estimates that nearly 78,000 Lehigh Valley residents are employed in industries that rely on close physical contact and therefore are severely impacted by COVID-19. Most at-risk employees in the Lehigh Valley are working in retail, food service, construction, manufacturing, transportation and warehousing, and healthcare industries. Similar to the trends of cost-burdened households, there are at-risk workers living in every part of the region.

It’s important to consider both the percentage and number of at-risk workers and households because it gives the most complete picture of the extent of risk in each neighborhood. The Lehigh Valley's communities with moderate or high instances of all three categories -- cost-burdened owners, cost-burdened renters and at-risk workers -- have the highest risk of experiencing displacement of residents. Together, these factors indicate the financial conditions of households both prior to and as a result of the Pandemic, with potentially entire neighborhoods likely to experience concerning levels of housing loss, resulting from the COVID-19 Pandemic.

The analysis shows that while older renters are the most likely to be cost-burdened, the youngest age group of 15-24 have the highest percentage of cost-burdening, at 52% overall among renters and owners. Roughly 35% of the 25-34 age group is cost-burdened, while 30% of the 35-64 age group pays too much on housing and 36% of people over 65 are cost-burdened.

Among all age groups, rates of cost-burdening are significantly higher for renters than for owners, surpassing 50% for all ages except for householders age 25-34 which is just under that number, at 47%.

Perhaps most concerning is that the data further shows that the Lehigh Valley is not exempt from the nationwide problem of housing attainability for seniors. About 62% of all senior renters in the region are cost-burdened – the highest for any age group in the Lehigh Valley – and most live in the suburbs, where other services like public transportation and healthcare are more limited.

Meanwhile, householders aged 15-24 are disproportionately affected by COVID-19 job losses compared to older workers. A national assessment by the US Bureau of Labor Statistics (June 2020) identifies workers ages 16 to 24 as having the greatest representation in highly-exposed employment sectors. The increased risk of job loss or work reduction for this age group compounds pre-existing issues of housing attainability, where locally 52% of all young households were already housing cost-burdened pre-pandemic.

Regional housing sales have been climbing since 2011 – reaching nearly 8,400 units in 2018. This trend has caused the median sales price to increase more than $10,000 over two years. Despite this increase, regional housing prices remained below their pre-recession peak through 2018.

Single-family detached housing continues to represent the largest portion of the housing in the region, but its market share declined 9% between 2016 and 2018. This change is due to recent growth in single-family attached and multi-family construction that has resulted in a more diverse housing market for the region. 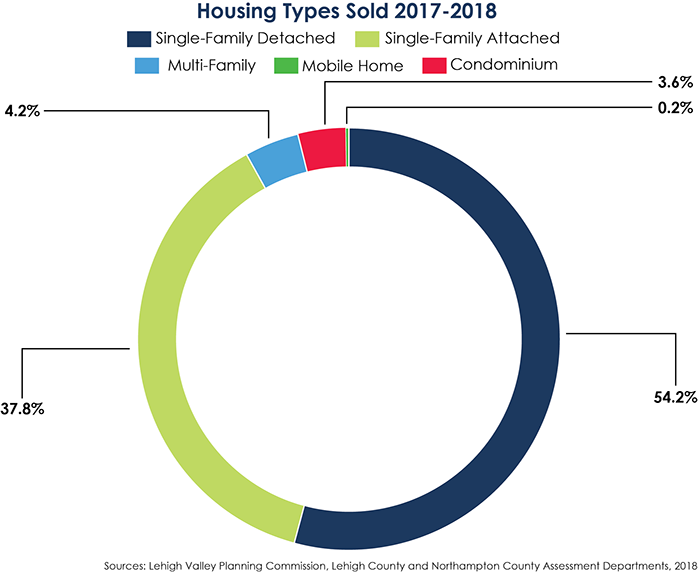 Single-family detached home prices have increased three times as much as the overall market, climbing by $29,000 between 2016 and 2018, while single-family attached and multi-family home values both increased by $14,000 during the same period. These increases are contributing to housing becoming less attainable in the region.

Condominium values, however, have barely increased and the median sales price of mobile homes has declined between 2016 and 2018. These two sections of the housing market represent a very small amount of overall housing sales. 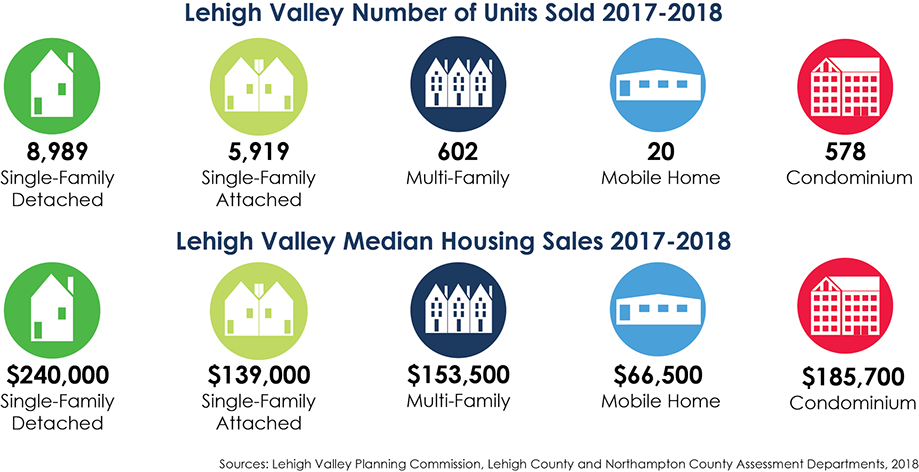 Owner-occupied and rental markets remain in high demand across the region. Available units have declined nearly to the level last seen in 2005, despite the amount of new construction in recent years. This increasing demand for housing is contributing to rising costs in the region. 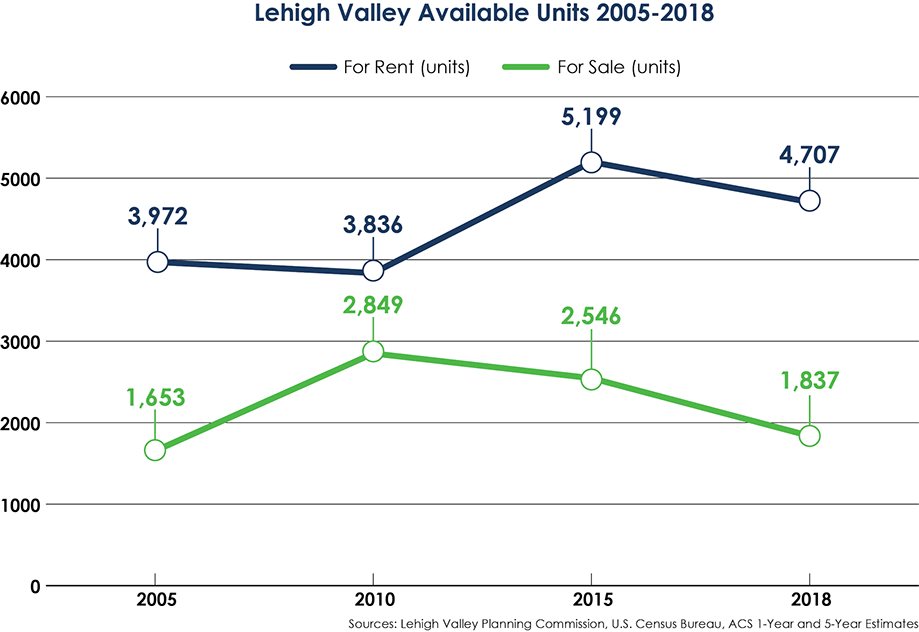 The school districts with the lowest median sales value have remained consistent over the last several years. Many of these communities are more urban, with smaller and older houses.

Over the last two years, home values in the Nazareth Area School District have increased significantly, joining homes in the South Lehigh and Parkland districts as having the highest median sales prices in the region.  Many of these communities are more suburban/rural and have larger and newer homes.

The Lehigh Valley rental market has grown steadily, as the number of renters has increased every year since 2012. As trends show a greater interest in urban living nationally, more people in the region are choosing renting over homeownership. In the Lehigh Valley, more than three-quarters of all apartments have rents that fall between $500 and $1,500 per month. 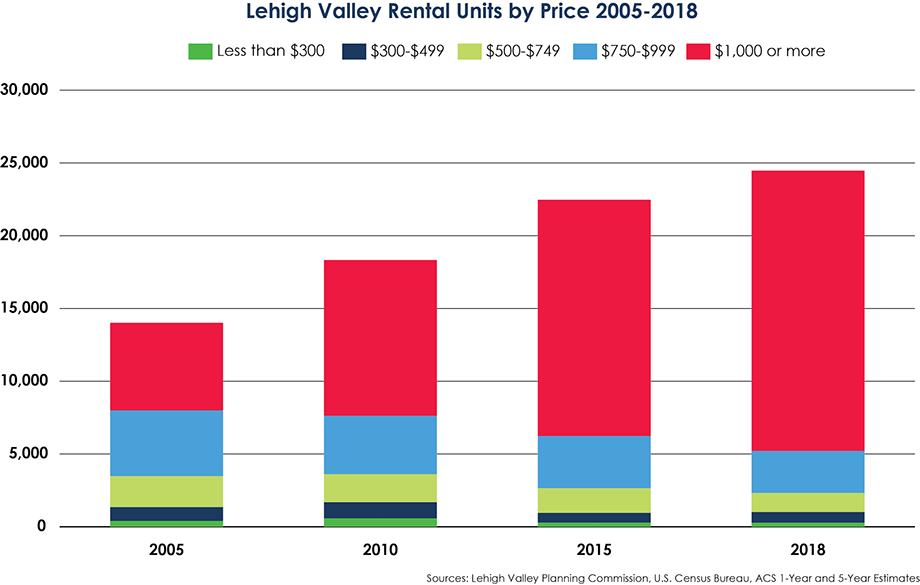 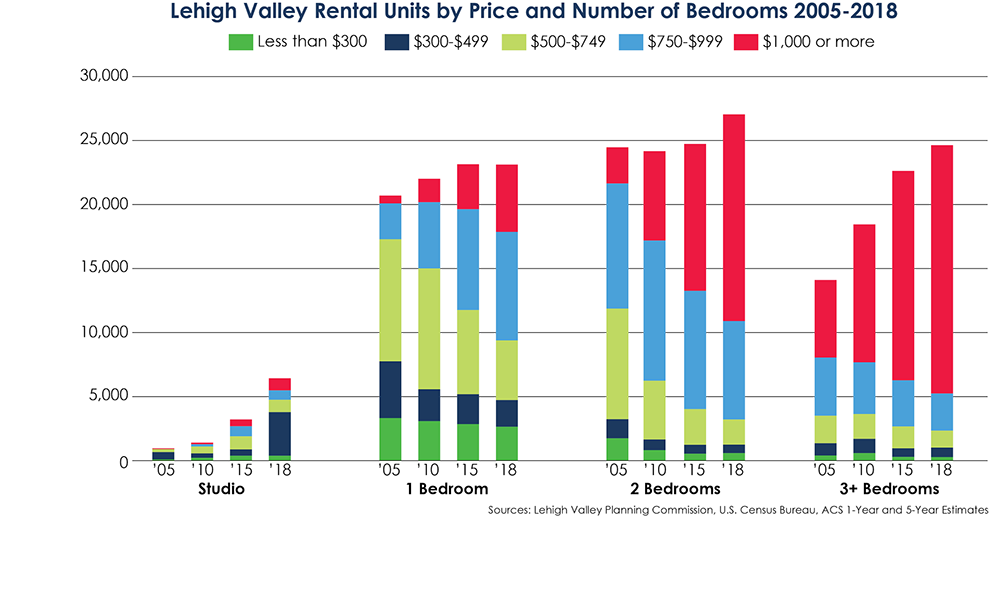 Homeownership remains the dominate method for residential living in the Lehigh Valley, but that version of the American Dream has been undergoing a change recently, as an increasing number of Lehigh Valley households are renting their home. Since 2005, the proportion of renters has increased by 5% to 32% of the overall housing market. This change is likely driven by a variety of factors, including changing preferences, housing costs, ability to save for a down payment and ability to qualify for a mortgage. However, it also has been aided by the amount of new apartment housing built since residential construction began to rebound after the Great Recession (December 2007 to June 2009). Both ownership and rental levels are considered healthy for a housing market. 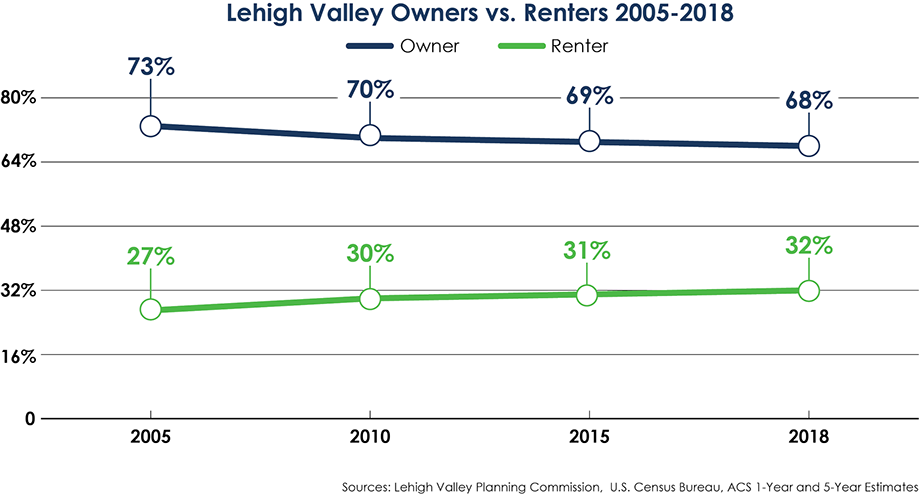