The Lehigh Valley has been adding more than 4,000 new residents a year for seven decades. All those people need more places to live, work, shop and recreate. Here’s a look at how investors and developers have been building to handle all that new demand.

Since the Great Recession that ended shortly after 2010, the Lehigh Valley housing market has become more diverse. No longer dominated by the single-family detached home, housing over the past decade has included a growing number of townhouses and apartments.

Even so, 2020 saw nearly double the number of proposed detached single-family homes as 2019. This reflects a strong  interest in this housing type, even as the market becomes more variable with growing demand. We expect for this to continue in 2021 and into the future, if trends remain the same and developers continue to build more inventory.

This trend offers insight into where we’re likely going over the next several years, as communities focus on densification of housing to preserve farmland and open space. Though not a strong market force, twin development has remained steady since 2012, offering a nod to the region’s character and history. However, the annual volume of all units approved is still at half the rate seen in the early 2000’s, limiting housing opportunities throughout the region when coupled with steady population growth and the trend of smaller household sizes. From 2019 to 2020, the density of single-family detached proposals remained the same, while apartment density decreased from nearly 18 dwelling units per acre to approximately 12 units per acre. It’s a decrease that was expected after 2019’s apartment boom was dominated by Allentown’s burgeoning high-rise market. While 2020 included a 40% increase in apartment proposals, they were of varying sizes spread across a range of municipalities, supporting infill development, revitalization and housing for all.

The year 2020 continued the trend of diversifying housing types in the Lehigh Valley, with nearly half of all units proposed consisting of apartment units. All of the apartments being constructed are fulfilling a need, but are also only providing an opportunity for people to rent. 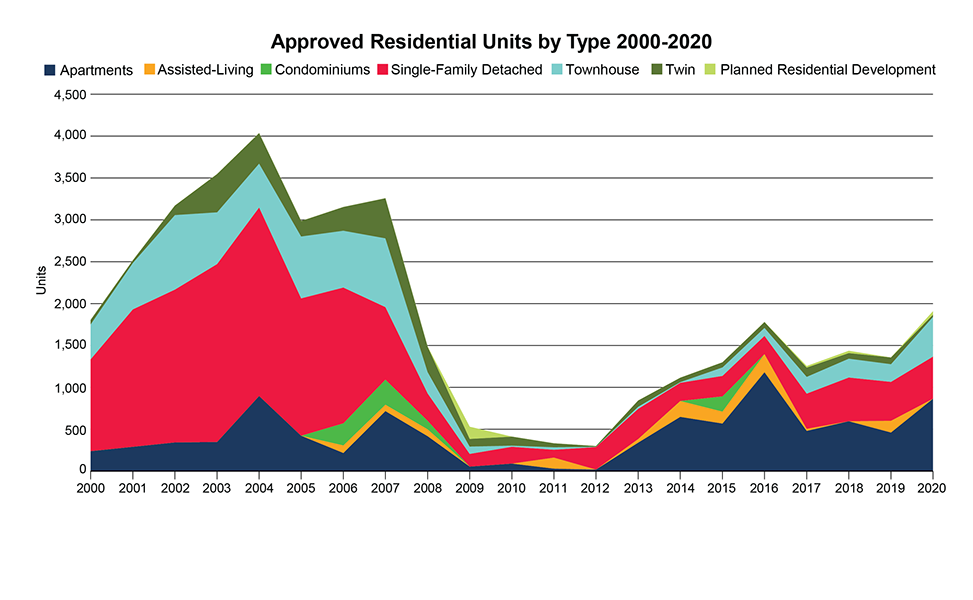 The LVPC reviewed more than 12.2 million square feet of non-residential development in 2020. That makes it one of the busiest non-residential review years in the region’s history, surpassing Pandemic-adjusted expectations. Planned investments by the private sector, primarily in the suburbs of Lehigh and Northampton counties, remained steady. However, preliminary proposal volume was much greater than approved plans. Nearly the same as 2019, there were 787 acres included in 2020 approved plans.

Commercial development has slowly, but steadily been increasing over the last 10 years. The proposed hotel expansion at the Wind Creek Casino in Bethlehem and Mill Creek Hotel in Upper Macungie Township are two of the larger commercial developments approved in 2020.

The Pandemic accelerated the ‘death of retail’. With so much retail vacancy created in 2020, it’s more likely that businesses seeking space are utilizing existing retail space, rather than pursuing new construction. Nevertheless, several smaller retail developments were proposed in 2020 and largely part of mixed-use complexes.

The last several years, in particular, have demonstrated the public and non-profit sector’s commitment to the region through sustained public and quasi-public development proposals. Notably, the region saw quite a few educational proposals, demonstrating a commitment to the expansion of academic offerings and social opportunities. Proposals from three public schools and a charter school will expand capacity and equity for the Valley’s youth. Higher education facilities proposed services for students, including a community center at Lafayette College and a ballfield complex at Muhlenberg College.

If the past five years continue into a 10-year trend, industrial development will remain steady—with expected new proposals totaling 5 million annually—while public/quasi-public and commercial proposals will continue to increase.

The Pandemic has accelerated the move to an online and on-demand economy, and the industrial sector continues to respond.

Over the past six years, 26.7 million square feet of new warehouse space has been approved by local governments in the region and another 10.3 million square feet remains in the approval pipeline. Fueled by location within a single truck driver shift of 100 million potential consumers, the Lehigh Valley is on pace to see a nearly 50% increase in total warehouse square footage, just since 2015, and there’s no indication the trend will end anytime soon. In fact, industrial developers are finding new ways to move goods into and out of the region more quickly.

Automated and taller, or High Cube, warehouses emerged in 2020 as a new land use as more goods are ordered directly, skipping the stop at a physical store location. These ‘robotic’ and high-volume warehouses will change the face of freight in our region.

Data from commercial real estate firm CBRE Group shows that lease rates are relatively low compared to the Lehigh Valley’s peers along the Eastern Seaboard, an indication that development pressure will continue.

Closer to home, the region’s interstate access and proximity to major metropolitan areas mean the aggregated lease rate of just over $5 per square foot is higher than Central and Northeastern Pennsylvania.

Evidence of this is a budding industrial area in Upper Mount Bethel Township being marketed by CBRE as ‘the largest industrial development on the East Coast’. At the same time, lease rates now at eight years on average are shorter than they previously were, meaning less guarantee over the long-term that industrial spaces will operate in the same manner as now.

Traffic volumes, number of employees, need for transit, emergency management services needs and even tax revenues could change in under a decade. Changes are not isolated to one or two areas, but instead spread across the seven existing and three emerging industrial districts spread across the Lehigh Valley.

Communities will need to keep an eye on the future when considering industrial proposals for these large structures and how they might be used over the next couple of decades.